About CFS
Founded in 1981, the Canadian Federation of Students is a bilingual national union, composed of over 530,000 students from more than 65 university and college students’ unions across Canada.
Federation provides students from across the country with an effective and united voice, provincially and nationally. They create space and foster opportunities for students to join together in creating lasting change and winning victories, both on and off campus. Because universities and colleges are funded primarily by the federal government and administered by provincial governments, the policies and priorities of both levels of government determine the accessibility of post-secondary education in Canada. Tuition fee levels, student financial assistance programs, Indigenous student funding, and funding for research are all set directly or indirectly by both levels of government.

What do they provide?
The Canadian Federation of Students offers a number of programs and services in order to offset the high cost of education. URSU uses some of these services, or uses alternate providers for other services. The following are services that are available to students:
-Free International Student Identity Card (ISIC): Save money on flights, bus tickets, sporting games, and more!
–Notebooks & Day Planners
–Free Tax Filing
Students have prioritized purchasing and are provided ethically sourced materials with consideration for the rights of workers and the environment. Collectively participating in the benefit programs gives members of the Federation the ability to negotiate for better pricing, while maintaining high quality.
–Graduate Student Mental Health Guide
The National Graduate Caucus (NGC) of the Canadian Federation of Students engaged in a one-year research project to develop a graduate student mental health toolkit. This toolkit aims to equip graduate students’ communities to evaluate and improve the state of graduate students’ mental health and wellbeing at post-secondary institutions in Canada.
Find more tools and guides from the Federation here. 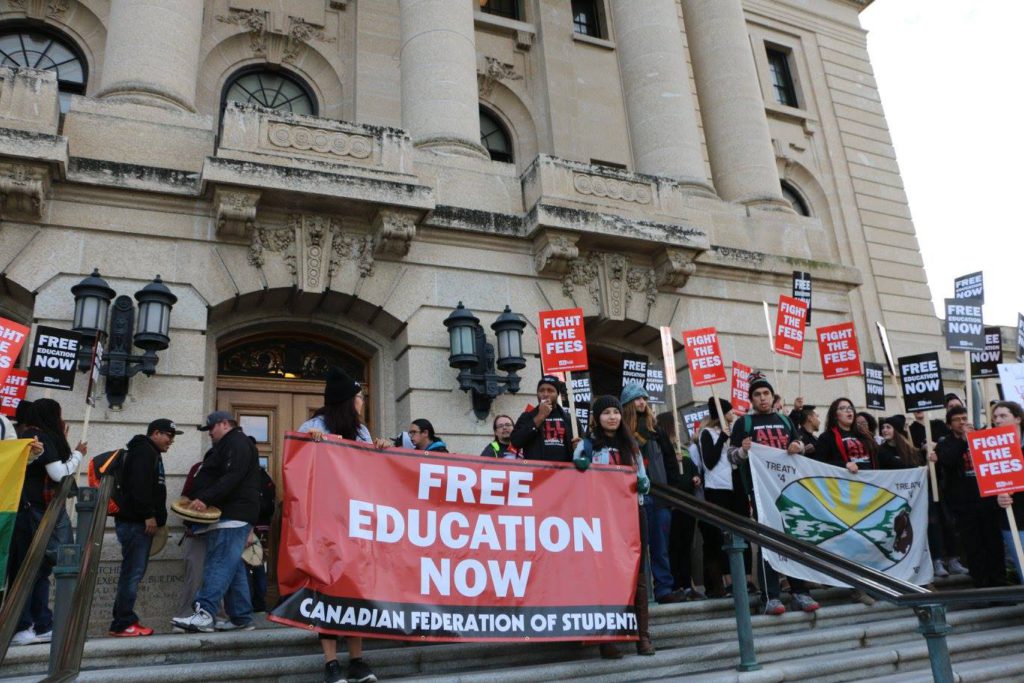 Members of URSU, FNUniv SA, and the CFS stand on the steps of the Legislative Assembly of Saskatchewan to demand a freeze on tuition increase and the rising cost of education on November 3, 2016.

How are your Student Fees distributed?
URSU Student Fees go towards the support of various URSU programs and related services. A large portion of these fees go directly to several different funds and support centres as previously determined by referendum. The remainder is used to support URSU operations and various campaigns throughout the year. The following schedule illustrates how your Student Fee is distributed.

The Canadian Federation of Students is a national organization that lobbies on behalf of students, in support of students’ rights, and on issues that affect students’ lives. URSU is member Local 9 in the CFS.
Canadian Federation of Students (CFS) Saskatchewan – $0.74 PT/ $1.56 FT
The provincial component of CFS carries the same mandate as the federal component, but focuses on the provincial level.

Didn’t students vote to leave the CFS?
URSU put forth a plebiscite question for students to vote on during the 2020 General Election in March of that year. This referendum attempted to give legitimacy to URSU’s existing withholding of CFS funds.
As has been demonstrated in numerous legal cases, most recently the CUSA v CFS injunction, this referendum was illegal, violated URSU’s contractual agreements, and placed a large liability on URSU and students.

The plebiscite question and the manner in which it was voted attempted to circumvent the process set out in the CFS bylaws. Binding referendums on decertification from the CFS require 15 percent of students on campus to first sign a petition and deliver it to the CFS through registered mail. URSU attempted to induce members to sign this petition by offering to enter them in a draw for $5000 or “free tuition”, yet was still unsuccessful in securing the 15% of signatures.

In 2022, the URSU Board of Directors set a plan to solve this very large liability issue, which included returning part of the currently held funds to CFS, with a commitment that they would use those funds to organize in Saskatchewan through the CFS-Saskatchewan Component.

It is important to note however, that students must guide this process and this is only a stop gap. Students will vote on this issue through URSU’s democratic mechanisms, on whether the fees should continue to be withheld or remitted to the CFS as we are contractually obligated to do.

What is the URSU – CFS – Student Relationship?
Students are members of both URSU and CFS. Part of the fees students pay URSU go to a number of organizations (link to student fees page), including a fee that was voted on by students to go to the CFS and the CFS Saskatchewan, which is a provincial body to organize in Saskatchewan made up of URSU, FNUnivSA, GSA UofR, and GSA USask.

What led us here and where do we go from here?
Since 2015, URSU refused to give the money that it contractually owed CFS as collected by students to CFS. This meant that the provincial organization did not have enough money to function.
Despite this, over the years, CFS and URSU still collaborated on protests, actions and other issues. 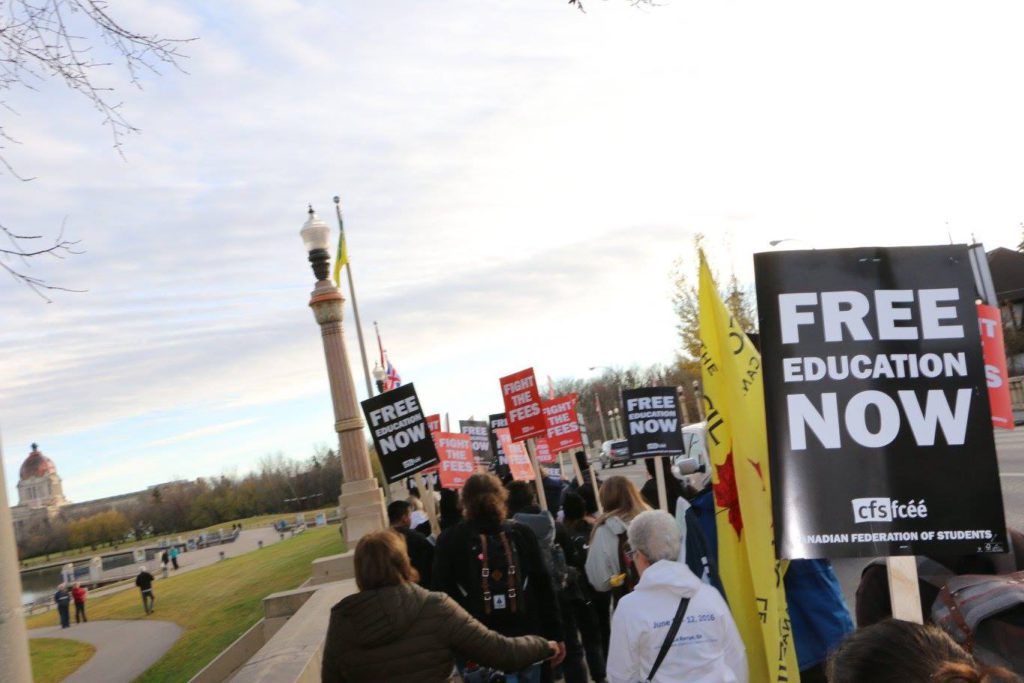 Members of URSU, FNUniv SA, and the CFS march south on Albert Street Bridge near Wascana Lake with the Legislative Assembly of Saskatchewan in the distance. They march with members of the public and other community groups to demand a freeze on tuition increase and the rising cost of education on November 3, 2016.

In 2020, URSU held a referendum to vote to hold CFS fees indefinitely. This referendum was not recognized by the CFS and did not follow the legal bylaws that were required to be followed, but did pass.
This referendum, as has been established in numerous legal cases (link to relevant cases, use briefing note for those cases), and most recently in a case between CUSA and the CFS, was not legally defensible and wholly of no force or effect, and put a great deal of liability on URSU with regards to URSU withholding more than 1 million dollars of CFS funding. Had CFS sued URSU, CFS would have easily won. Over the last year however, the CFS and URSU were able to work these issues out, thanks in part to good faith on both sides and a desire to resolve this conflict and focus on representing students.

As part of this, the following steps have been taken. Part of the funds withheld have been returned to the CFS as part of an action plan approved by the board. Specifically $500,000 of the over 1 million dollars. As part of this process, the CFS has committed to URSU that:

At URSU’s next General Meeting, students will be asked to vote on whether the remaining funds should continue to be withheld as they are collected, or whether we should return these funds to CFS and begin remitting them regularly as we are contractually obligated to.

To this end, it is essential that students over the year evaluate the CFS’ campaigns, services and efforts to provide direction on what needs to be done. While we are optimistic regarding the promises and commitments made by the CFS, If the CFS fails to uphold their commitment to students in Saskatchewan or fail to satisfactorily serve students in Saskatchewan, it will mean that students will need to take steps to leave the Federation following the processes available, which would require paying back all fees owed to the Federation, collecting a petition of 15% of students, and holding a referendum by paper ballot.

Why is a national student movement, in some form, important?
In order to achieve a more affordable, accessible post secondary education system, it is important for students to unite and build an organized response to cuts to education. Education funding cuts have resulted in increased tuition fees, less accessible education, less classes, larger class sizes, and a number of other issues. 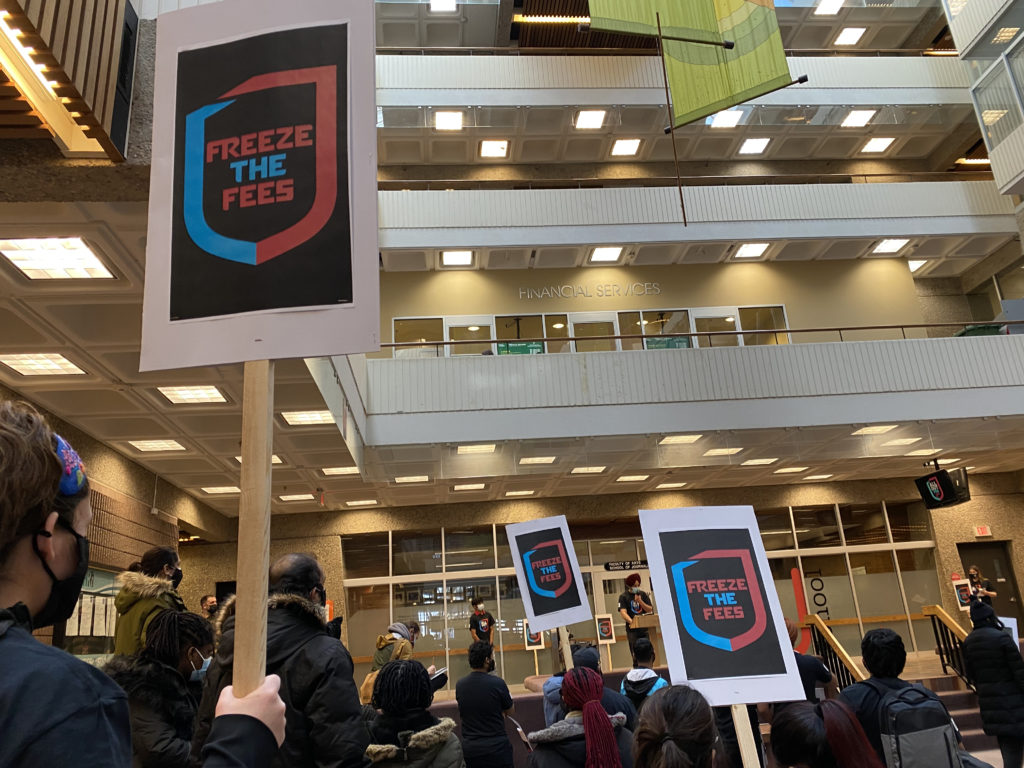 In front of Financial Services and within earshot of the President’s Office, students protesting the lack of services received for the abhorrent fees paid and the unequal costs faced by International Students gather in the Ad Hum building of the University of Regina Main Campus February 2nd, 2022.