No one should be told how to express their gender identity and no one should interfere with someone’s journey of finding what that identity encompasses. “Reparative” or “conversion” therapy is a dangerous practice that targets LGBTQ youth and seeks to change their sexual or gender identities. So-called “conversion therapy,” sometimes known as “reparative therapy,” is a range of dangerous and discredited practices that falsely claim to change a person’s sexual orientation or gender identity or expression.

The federal government of Canada’s updated bill to ban the practice of conversion therapy was adopted unanimously by members of Parliament. Sixty-two Conservatives, including 13 of Saskatchewan’s 14 MPs, voted against that previous bill, called Bill C-6, in June.
A study, published in the scientific journal PLOS One, used data collected from the Community-Based Research Centre’s (CBRC) 2019 Sex Now survey, which included responses from more than 9,000 participants. Of the 10 per cent of respondents who said they had experienced conversion therapy, 72 per cent said it started before the age of 20. According to the study, 67 percent of people who experienced conversion therapy say they did so in a religious or faith-based setting, while 20 per cent say they went through the practice with a licensed health-care provider.

Since Bill C-4 went into effect on Jan. 7th, it’s been illegal to force anyone in Canada to undergo conversion therapy, to profit from, promote or advertise the practice, and to take a minor abroad to receive it.

On August 13th, 2021, one day after the City of Regina passed a bylaw prohibiting conversion therapy, the group “Queen City for All” and the Saskatchewan NDP called for legislation from the provincial government to condemn the practice and ban it province-wide. 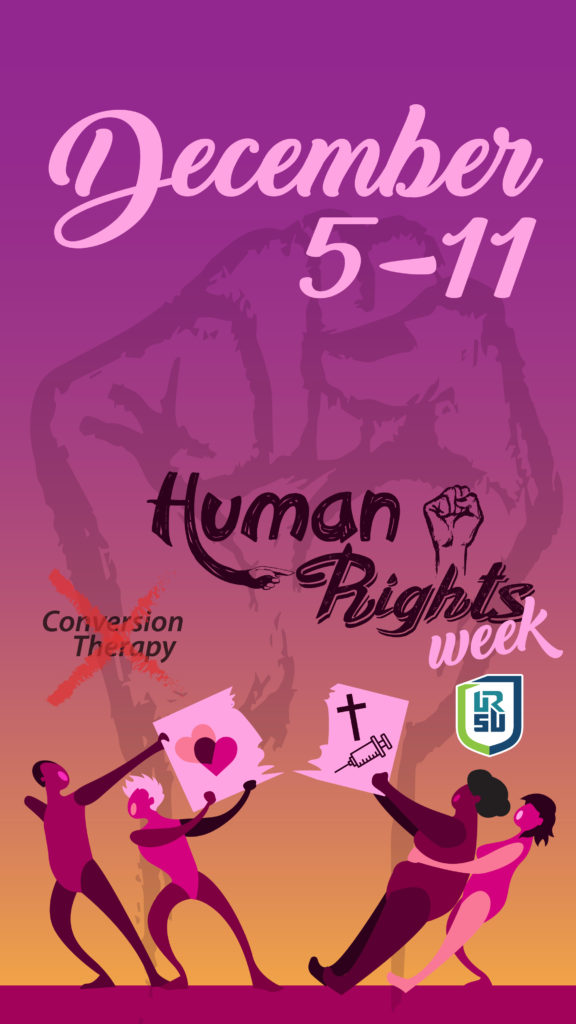 Such practices have been rejected by mainstream medical and mental health organization for decades, but due to continuing discrimination, systemic barriers, and societal bias against LGBTQI2S+ people, some practitioners continue to conduct conversion therapy. Minors are especially vulnerable, and conversion therapy can lead to depression, anxiety, drug use, homelessness, and suicide.

But as part of a broader investigation into the unregulated life coaching industry, the CBC news television program Marketplace discovered that multiple life coaches in the United States, where there is no blanket ban, are still offering conversion therapy to Canadians.

Students are the future decision makers and tomorrow’s power takers and we at URSU urge them to make sure all humans can express their gender identity without fear and with the freedom they are owed.

3.4x more likely to be at high risk of HIV and STDs