On the Stage, Out in the Community, And Just In Time

Fools Rush In and we love them for it, especially when they’re bringing community talent to the stage live and on campus.

“Fools Rush In” the comedy show took place April 1st (of course) and gave all kinds of performers an opportunity “to grab the stage, the spotlight, and our attention.” 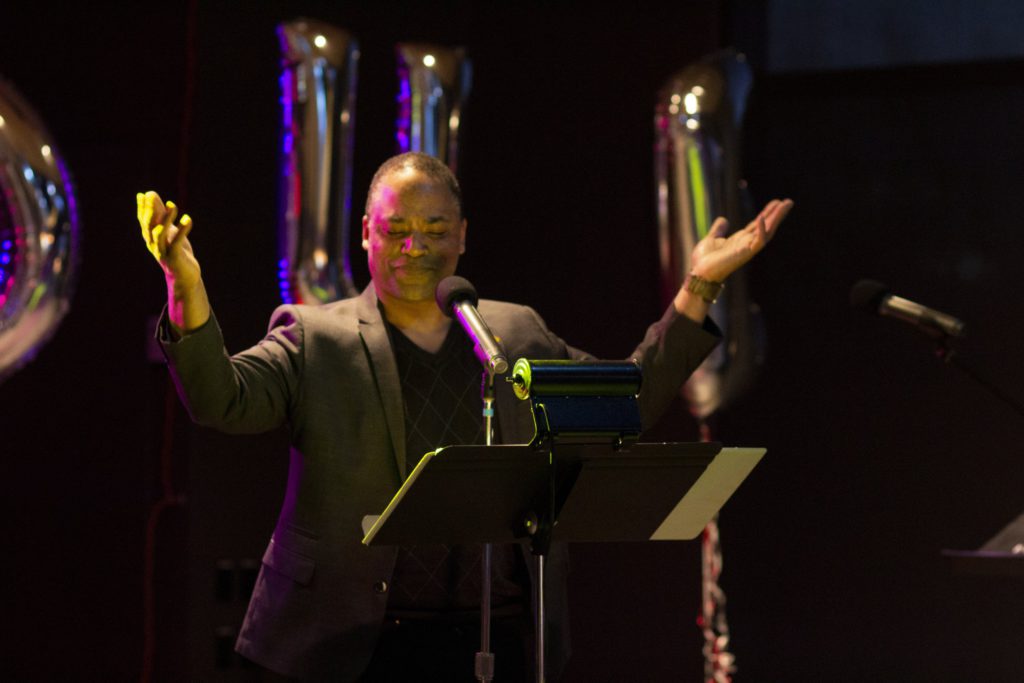 In an effort to offer a safe space for amateur as well as professional performers, On Cue Performance Hub invited artists of all ages (19+), genders, and skill levels to help put on an evening of entertainment hosted by Chancz Perry and put on at The Lazy Owl.

Dr. Kathleen Irwin, Ph.D., who is a member of On Cue Performance Hub’s Executive Team, spoke to why they chose the Lazy Owl for their event.

“We chose the Lazy Owl because of its availability and location on campus,” Irwin said. “We wanted to be part of the buzz at university because we feel that what we do will be warmly embraced there.”

“The staff was very friendly and helpful,” said Irwin. Communication is easy, she said, and the space can accommodate a lot of people. That sense of accommodation is evident with a new menu, featuring more vegetarian options, and a dedication to proving a safer more inclusive space.

Being able to make room for a lot of people comes with the territory when working with a group like On Cue Performance Hub who have deep roots and a growing network.

“It feels like we have worked with almost every independent performing arts organization in the city in this first year,” said Landon Walliser, Treasurer and Publicity Consultant for On Cue Performance Hub.

On Cue works with everyone, on the stage and in the creative community, as they have had partnerships with the Mackenzie, The Globe, Deaf Crows Collective, Saskatchewan Playwrights Centre, FadaDance, The Youth Ballet of Saskatchewan, etc.

When asked what sets them apart from other similar groups, Irwin explained that although their programs are varied and their roster diverse, their focus is singular. “We help emerging artists in the community – artists who otherwise would not have a chance to get a foot in the door.”

“We support performing artists [to] do what they do best – perform,” she added. “We help take work from page to stage.”

On Cue have been an official organization since March of 2021, but the initiative started back in 2018, when a meeting was held for theatre artists in the city to discuss the issues they were facing, “so we could begin reckoning with the systemic issues within the performing arts community in Regina,” said Walliser.

When asked who has helped On Cue the most, Walliser mentioned the City of Regina and the partnership with the University of Regina that has allowed them to hire experienced students or recent graduates.

Earlier this year, On Cue Performance Hub officially announced their partnership with Why Not Theatre in Toronto to present the RISER Project here, which will support the development and production of 4 new Saskatchewan shows.

Anyone who does work in the performing arts will be interested in the work done by On Cue, said Walliser, as they are dedicated to presenting an array of disciplines.

“This year we have had actors, clowns, dancers, spoken word artists, musicians, all presenting their work their way.”

As an artist lead group, On Cue’s entire season is built on the proposals that are sent to them by artists in the community. If you have a show or an event you would like to present, or you would like to volunteer or get on the steering committee, get in touch with them on through their website: www.oncueregina.ca

What sets On Cue Performance Hub apart from other similar groups is, as Walliser said,
that “unlike a production company, we don’t dictate how you present your work or impose any sort of artistic vision of ours upon it.”

“[And], unlike a presentation company that just helps you put the show or event on, we do provide training and resources and help you secure funding and partnerships,” he said “It’s the best of both worlds. We are truly about serving the artist first.”

To see what’s coming up with On Cue Performance Hub, visit ​​https://oncueregina.ca/whats-on/our-season.